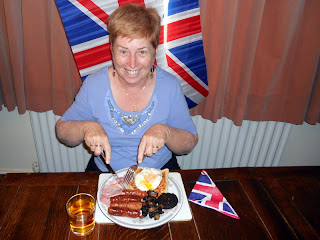 Pity about the weather, but the Poms are used to having lots of it, and it certainly didn't dampen our spirits down here at Totton where Ange and Paul and I started with a huge English breakfast.  Here it is!

This included black pudding, which I did not like, and refused to eat any more of after Ange told me what was in it.... Answer at the bottom of this post.

I couldn't finish my plate, and neither could Paul.  We noted that Ange gave herself a smaller helping but was most insistent we finish ours!

Understandably we had no lunch.  The mothers (Paul's mother Bette and Ange's mother Enid) were invited for the high tea which was to follow the watching of the Queen's parade of boats on the Thames.  Here are a couple of photos from the BBC, which I photographed on the TV. 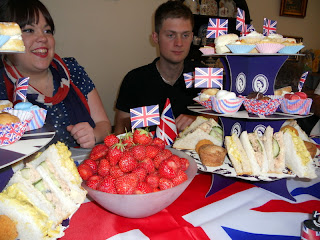 Ange's son Robert and his girlfriend Soozy joined us for the party.

Those English strawberries were simply delicious.

The sandwiches included Coronation Chicken, and salmon and cucumber. 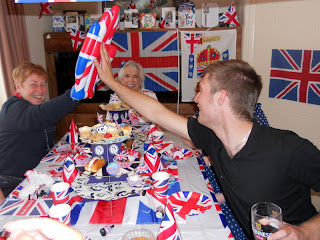 I did the Royal wave and high-fived Robert.

That's Bette at the end of the table.  She was born in the same year as the queen. 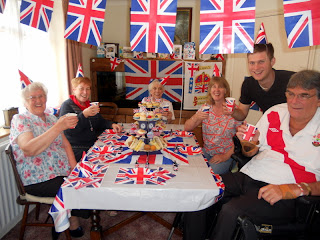 We had a great day, as you can see in this photo.

Later, Ange's older son Christopher, a train driver and his wife Sarah, a photographer came over for coffee and cake.


Answer: Oats and pig's blood.
Posted by Margaret at 6:57 AM